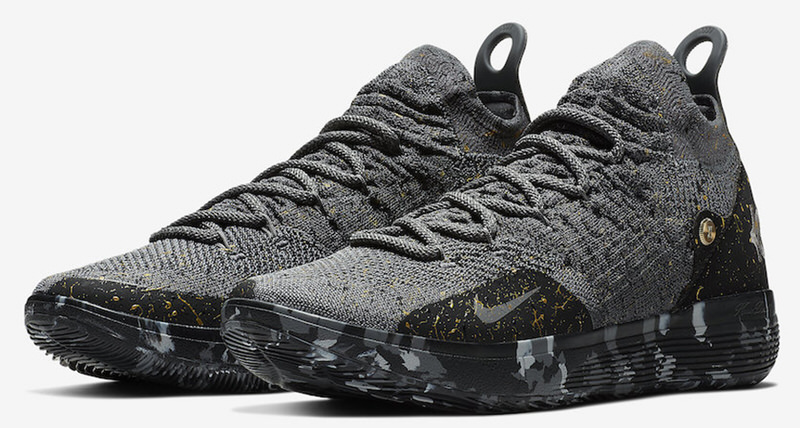 Two-time NBA champion and back-to-back Finals MVP Kevin Durant heads triumphantly into Warriors season three with definitive hardware. It’s widely expected that the team by The Bay will nab another chip this season, undeniably placing KD in a space with the all-time greats.

His upcoming Nike KD11 “Twilight Pulse” seems to explore — or rather celebrate — his career-defining accolades.

Colored in a dark grey hue fixed into lightweight Primeknit construction, black reinforcements are fused throughout the mid-cut style at the forefoot, quarter panel, and heel. In addition, gold speckles appear within those reinforcements while the upper is ripe with a gold splatter effect embedded into the knit fabrication. Hardware on this KD11 is few and far between, yet it too is gold and matches Durant’s signature at the footwear. Thus making it simple to assume the shoe is in some way a reference to championship gold.

Complete with a marbled midsole that has been a staple on Durant’s current signature, look for the Nike KD11 “Twilight Pulse” on October 1 for $150 at select Nike retailers.